As experts in providing business gifts like mugs, notepads and promotional pens, we’ve seen the power that effective marketing can have on an organization’s bottom line. The rise of new media platforms has expanded the opportunities for particular branch of product promotion – celebrity and influencer marketing.

From TV personalities to the world’s leading sports stars, people with public profiles are often seen using that profile to broaden their revenue streams. That could either be through endorsing other business’ products on everything from trainers to beer or starting up their own brand in a trending industry.

We know their celebrity profile allows them to reach a large audience, but how successful are celebrities at promoting products, and which international stars have the biggest influence? To find out, we conducted some research and created the first Adler Celebrity Influencer Index.

To find out which of the world’s celebrities have the most significant influence on the products we buy, we surveyed 2,000 people around 12 of the most renowned worldwide superstars from music, film and TV, and the brands they own:

Based on the survey responses, each celebrity was given a score based on these four ranking factors:

After following the criteria above, ADLER’s Celebrity Influencer Index looks like this: 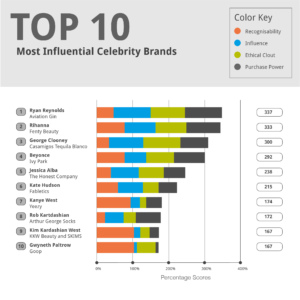 Ryan Reynolds beat out the rest of the competition, with solid scores across all four factors. Female singer Rihanna and US actor George Clooney complete the top three. Rihanna scored higher than Reynolds on the Recognisability of their brand, and Clooney’s ethical clout was deemed more powerful than Reynolds’. However, the Canadian actor came out on top of everyone else on Influence and Purchase Power.

Given he beat off competition from the likes of Kim Kardashian West and Kate Hudson, the final standings may come as a surprise to some. However, as we will see from the analysis below, successful celebrity marketing depends on many factors.

What it Means for Brands

Whilst less than 1% of the world’s brands could only dream about being endorsed by any of the names in our study, our research uncovered insights that any business can feed into their marketing efforts.

Celebrity talents and entertainment producer Rachel Dalton told us why partnering with celebrity can be so powerful:

“People want to emulate the public figures that they admire, thus celebrities play a powerful role in our purchasing habits. People want to wear the same brand of clothing, use the same products, visit the same restaurants and vacation spots as their favorite celebrities.

“Celebrity endorsements can be extremely influential for brands in society today, and it is important to find just the right image for a celebrity you might hire to speak at your corporate meeting or entertain at your client event.”

Plenty of us consider celebrities to be having a positive effect on business in the following ways:

For brands delving into influencer marketing or celebrity endorsements, they need to carefully consider everything that comes with their profile. Get it wrong, and it could switch people off no matter how good your product is.

16% of people said they have boycotted a business after it was endorsed by a celebrity they didn’t like. When asked about the core issue at the heart of the boycott, they said:

Today, the ethics of brands are under scrutiny just as much as the quality of their product. This even extends to the ethics and personal opinions of celebrities associated with those brands – as Rachel Dalton explains:

“Just as people want to align themselves with the brands their favorite celebrities are associated with, the reverse is also true. If a celebrity has very different political views than we do, or has behaved inappropriately (think #MeTooMovement), we are more likely to boycott the products that that celebrity endorses.”

Choose your platforms and industries wisely

In the age of spam emails and fake news, our trust of media output is wavering. To find out what channels are most effective at influencing a purchasing decision, we asked respondents to rate various online and offline platforms where they might see celebrity product endorsements.

The data offers interesting insight into the most popular channels for influencer marketing. Television is still a trusted marketing phenomenon, but the other most established platform, radio, is deemed one of the least influential.

Modern advertising platforms also received mixed treatment. Given the regularity with which we engage with social media platforms, it’s no surprise to see it was voted as the second most influential platform. Social media’s gain has been the newspaper’s loss. The distrust of modern media, and decline in physical newspapers, is seeing its ability to influence people decline.

Industries also play a big role in how a celebrity endorsement is viewed by the public. 21% of people said clothing and fashion is the industry where celebrity endorsements have the biggest impact. This is followed closely by perfume and aftershave (20%) and beauty (18%).

The world’s biggest brands spend billions in marketing budget getting their product in the hands of celebrities. Given how the profile of a popular celeb can influence cultural trends, it’s no surprise to see the likes of clothing and beauty brands looking to capitalise by partnering with big names – who then publicise that product on an influential channel like social media.

If you’re a business looking to delve into influencer marketing, it’s important to consider the profile of those you partner with, and how that aligns with your target market.

Throughout our research, we found that two core groups of people were more heavily influenced by celebrity brand and endorsements – men and younger generations. Rachel Dalton confirmed why younger generations take greater notice of which products celebs use:

“Younger people tend to be more influenced by what celebrities are wearing and doing, as they are the ones on social media – more than their older counterparts. And social media is where it all happens these days.” 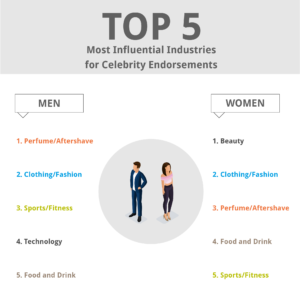 With 42%, Men were found to be 6% more likely than women (36%) to purchase a product if they saw a celebrity they liked endorse it.

Men are more invested in which celebrities are seen with which products and bring that into consideration when making a purchase. They’re also much more likely to boycott that brand if they see a celeb endorsement they aren’t a fan of – 20% have done so as opposed to 12% of women.

If your product focuses more heavily on men, involving a public personality could be even more fruitful. Our male respondents chose aftershaves, clothing, and sports and fitness as the top three most influential industries. If you happen to sit within one of these areas, influencer marketing could be for you. 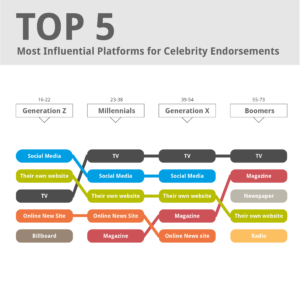 Online platforms like social media have seen a huge rise in the opportunities for brands and celebrity brands to influence our purchasing decisions. Our research found that younger generations such as Generation Z (16-22 year-olds) and Millennials (23-38 year-olds) were much more engaged with celebrity brands and endorsements than older consumers.

Generally, Generation X and Baby Boomers show greater ambivalence to celebrity brands and endorsements than anyone else.

With people who are more engaged in celebrity endorsements comes more potential to boycott brands. 23% of Generation Z and 25% of Millennials have done exactly that. This compares to just 16% of Generation X and 7% of Baby Boomers.

For a brand, this new data can inform the channels you wish to communicate with your customers on. Younger people are more invested in the latest cultural movements – TV personalities, film stars and alike – and they are influenced by the things they say, clothes they wear and brands they setup.

Older generations stick closer to what they know. Television and traditional media have always been the scope with which they consume media, and the rise of new platforms has not altered the way they are influenced when making a purchase.

The pressure on businesses to be more ethical and responsible is growing. Now that doesn’t just apply to your product but also the celebrity names that like or promote your brand. If you’re considering a move into influencer marketing, don’t’ just consider their follower count or industry they’re famous for. Consider how the public perceives that person, the channels they use to promote themselves, and how that matches up with your audience and key demographics.